In the 60s and 70s, some companies used photographs of Skipper (and friends) dolls to promote their product. Others copied original Skipper graphics from Mattel - some of them can be found in the "Skipper clones and competitors" section of this online guide. Nowadays, it’s hard to believe Mattel never sued any of these companies for plagiarism.

A German company, the “Crailsheimer Holz- und Spielwarenfabrik” (Crailsheimer wood goods and toy manufacturing company) sold a Skipper size dolls house with furniture around 1969/70. It was named “Play Set Gabi” (Spielprogramm Gabi). You could buy single parts of the furniture.

On some packaging boxes, Crailsheimer showed photographs of a brunette pink skin Skipper doll dressed in #1961 “Real Sporty” from 1968 in front of a kitchenette. The same Skipper doll and a Ricky in his original clothes doing the dishes were pictured on another box. Ricky dressed in his original shirt and blue jeans and a pink skin titian Skooter doll wearing the blue variation dress from #1942 “Right in Style” were shown on a box containing a wardrobe. The photograph on the dresser box pictured the same Skooter dressed in #1940 “Rolla Scoot” and Ricky wearing #1504 “Little Leaguer” These play sets are rare. 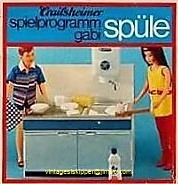 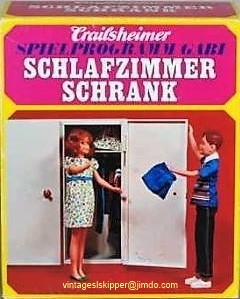 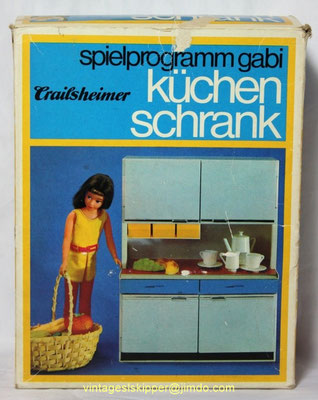 A Reissue Skipper in front of the kitchen "Gabi":

Advertisement from the "Crailsheimer Spielwarenfabrik" from the 1960s. On this picture you can see a Peggy doll (by German company Plasty):

This photograph shows the packaging of a Barbie sized clone doll made in Hong Kong. Her name was Lolita. Strangely, the graphics on the backside and the sides of the box showed almost exact copies of the graphics pictured on Mattel's Barbie/Skipper booklets. The only noticable differences were the faces.

Included in the packaging weren't any of these clothes, but a Barbie size dress - and a Barbie clone doll with wigs. Pictured left is the backside of the packaging showing a drawing of a doll dressed in "Real Sporty" #1961. This Skipper fashion was depicted with a hat (like on the original graphics by Mattel), which was actually never sold with this set. Since all of the fashions pictured were available in 1968, the clone doll must have been sold around that time as well. It was found in Germany.

A very similar doll in almost the same packaging and graphics - but with German inscription - was also available. This doll's name was Lolo. The company who sold this was called "F.I. A.M. BLAU-WEISS". 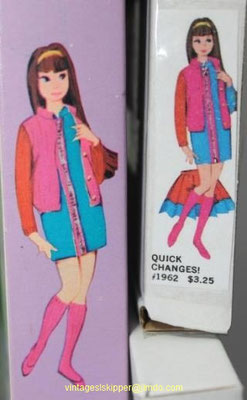 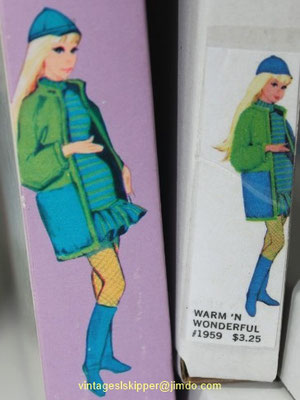 "F.I. A.M. BLAU-WEISS" (on the packaging it says "protected by law" ("Ges. Geschützt") sold this Lolo set in the late 60s. I couldn't find any information about this company, but if you search the web you can find lots of fashion doll clothes and "cheap" fashion dolls sold under that name.