Pepper was a Skipper competitor made by an American toy company - Ideal. She came in different styles and boxes and was dressed in different fashions (her clothes fit Skipper). Her big sister was Tammy.

Her eyes had a side glance (to the right), her hair was short. She had freckles. The founders of Ideal originally invented the Teddy bear in 1903. "Ideal Novelty and Toy Co." was founded in 1907. They became famous for their Shirley Temple and Miss Revlon dolls. In 1982, Ideal was acquired by the "CBS Toy Company", which was acquired by Hasbro in 1985.

Pepper has a friend with long, straight hair - Dodi and a slightly smaller play pal - Salty. Plus, there's a rare friend, Patti: she was sold as a Montgomery Wards issue only.

One of Pepper's cases:

Sears catalog page showing some outfits, Pepper and her playmates, her tree house and pony (you can see Salty pictured to the right):

This is Salty inside his original box and the illustrations from the back side of his box (photos courtesy of Molly Knapp): 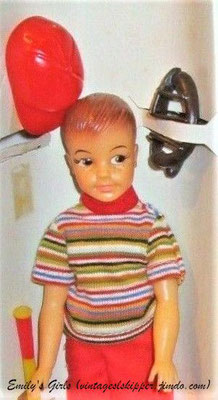 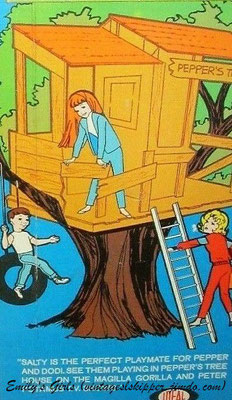 Some of Pepper's outfits (they were available in 2 styles of packaging):

There were also some rare Japanese exclusive outfits. Some outfits have additional digits after the 4 digit numbers.