Most of the variations weren't intended by Mattel (maybe except for the "Two-Tone" Skipper with beige eyebrows) - and only exist due to oxidation or other chemical reactions over the years (p. e. the "Color Magic" dolls). Or because Mattel ran out of hair fibers and used some other fibers to substitute them for a very short period of time (p. e. the "Raven" Skippers, some rare two-tone variations).

If you find dolls like "Color Magic" or "Black Cherry" Skippers, please keep in mind that these terms were made up by collectors to describe these htf or even rare variations of hair colors. Some - like aforementioned dolls - got their names because their hair colors look close the hair colors of the "Color Magic" or "Black Cherry" Barbies. Other terms - like "Copper Penny" or "Lemon Blonde" were invented by collectors to describe the hair color and have no origin in similarities to Barbie dolls. Sometimes you find dolls with hair colors that haven't been "named" yet.

It doesn't really matter if the gorgeous doll you found can be described as a "Color Magic" or "Lemon Blonde" Skipper.  No matter which term you use, it stays an htf/rare and lovely color after all. Irrespective of the reasons why these variations exist, they are very popular with collectors, which tend to pay high prices for the dolls. This wide variety of hair colors cannot be found anywhere else in the Barbie family and is one reason why collecting Skipper dolls is so much fun.

SL Skippers were sold in boxes stating "Blonde", "Brunette" and "Redhead". Pictured are these regular hair colors. However, some dolls were made with different hair fibers or with hair fibers that changed color over the years.

Here you can see dolls with special hair colors: Lemon Blonde (at the left), Two-Tone Blonde (in the middle) and Platinum Blonde (at the right). The Two-tone blondes have been found with darker and lighter blonde streaks. Frequently, these dolls have very fine hair that tends to break, however, there are also Skippers with these hair colors that have a lot of thick hair. All of these dolls have the markings: Skipper © 1963 Mattel, Inc. (except for the Bendable Leg dolls or the Raven Straight Leg dolls, which have the markings © 1963 Mattel, Inc.) and are rare/hard to find.

Besides the regular Redheads (pictured to the left) there are SL Skipper dolls with a big variety of red hair which are all rare/hard to find. All of these have the markings: Skipper © 1963 Mattel, Inc. (except for the Bendable Leg dolls, © 1963 Mattel, Inc.)

Some people believe the hair of the Auburn Color Magic Skippers is identical to the hair used for the Color Magic Barbies. CM Barbies came on the market in 1966. But all of the SL Skipper dolls with these unusual hair colors are marked Skipper © 1963 Mattel, Inc. and were sold starting 1964 - prior to the CM Barbie dolls.

Maybe Mattel experimented on some color magic hair fibers and used what was left for the Skipper dolls - before finding the final color magic hair they used on Barbie later on. Maybe Mattel thought the colors wouldn't change without using the chemicals needed for the Color Magic Barbies hair to change color.

But I believe that there's no connection to the hair fibers used for the CM Barbies at all. At any rate, the so called "Color Magic" Skipper dolls are rare and very sought-after by collectors.

It is likely that Mattel originally had planned on offering a wider variety of Skipper dolls, but gave up on that because the production of so many different Skipper dolls was too costly. This thought is based on the special features that represent some dolls fabricated with a special hair color (Two-Tone Skipper) and which clearly differentiate them from the regular dolls.

The so called (Orange) Color Magic Skipper dolls were sold as redheads in redhead boxes. Their scalps are orange just like the ones of the regular redheads. The shade of orange probably developed due to chemical reactions.

(Auburn) Color Magic dolls were sold in boxes stating "brunette" – presumably their hair originally was brunette and oxidized over the years, just like the hair of the first Black Francie dolls #1100 from 1967. Maybe the Two-Tone Color Magic Skippers were rooted with the same hair - which has streaks of brown hair that hasn't oxidized yet - or maybe will never oxidize.

Strawberry Blonde dolls were either rooted with hair that oxidized just like the Auburn Color Magic hair - or already came with that kind of unusual "red" hair. They do have an orange scalp and were sold in boxes stating "Redhead". 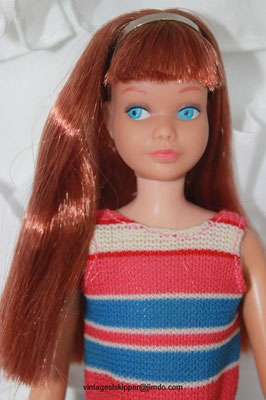 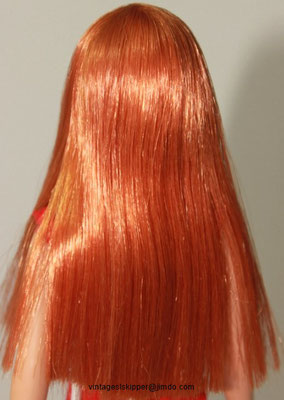 Orange Color Magic or Copper Penny: Very bright orange hair, scalp is painted red/orange (the only exception of the Color Magic Skippers with a reddish scalp), came in a box stating "Redhead"

Black Cherry: Very unusual color found on some Skipper dolls with features of a  Real Two-Tone Skipper, including beige eyebrows. The color changes depending on the light. In bright light the hair looks red, in darker light it is of a very dark brown. This is definitely the rarest hair color/Skipper doll to find. Dolls were sold in boxes stating “Brunette”.

Ruby Red: Extremely unusual color found on a  Skipper doll . The doll is most likely a Sample Skipper. The eyebrows match the color of her hair. This doll has extra log bangs. Her scalp is red. Probably sold in a box sating “Redhead”.

But you can also find some dolls with very dark brown hair and there are even a few rare dolls with black hair – often called “Raven”. Some Skipper doll’s hair tends to discolor to a grayish color (this can also be seen on some TNT Skippers).

Some more variations of hair colors, all of them rare, are: Two-Tone or Real Two-Tone (brown hair with red streaks); Two-Tone Color Magic or Reverse Two-Tone (red hair with brown streaks); Black Cherry (red or brown hair color depending on surrounding light). All of them were sold in boxes stating “Brunette”.

In fact, nowadays it's very hard to find a brunette Skipper doll whose hair is still brown and hasn't changed over the decades!

Two-Tone or “Real Two-Tone”: This is the hair of "real" Two-Tone Skippers with beige eyebrows and beige /reddish streaks. The doll to the left has beige streaks, the right ones' streaks are between red and beige. The beige hair is very dry and tends to break. These dolls were probably intended to be two-toned. The scalp of these dolls is only painted dark brown at the very top/back part (the small round "plate"). The dolls were sold in boxes stating “Brunette”. 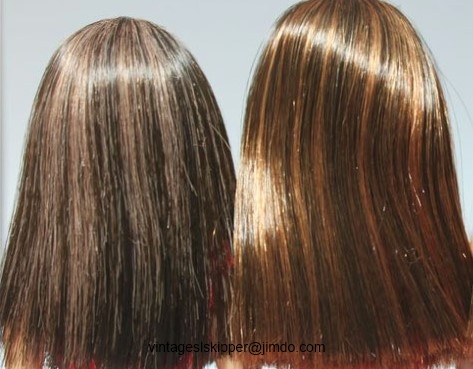 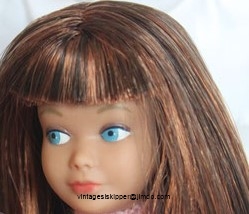 There’s a description of the Color Magic Two-Tone dolls in the paragraph „Redheads“.

Black Cherry: This is the same doll pictured under “Redheads”. She has all the features of a Real Two-Tone Skipper. Except that her hair hasn’t got streaks and the color of the hair changes depending on the light. In bright light the hair looks red, in darker light it is of a very dark brown. This is definitely the rarest hair color/Skipper doll to find. Dolls were sold in boxes stating “Brunette”. 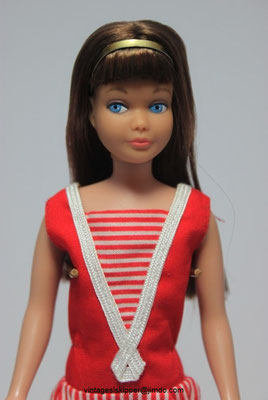 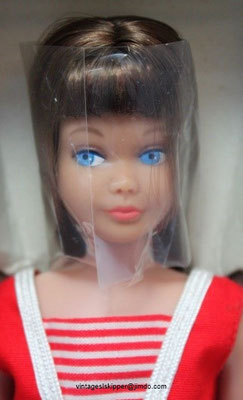 Black/Raven: Pictured is a doll with very dark, almost black hair. It looks either a very dark brown or black depending on the light. This doll has the marking: © 1963 Mattel, Inc.

The doll shown to the left is one of the Raven girls I believe were only issued in Germany: Her face is not as discolored as the faces of the Raven Skipper dolls which were sold mainly in the U.S.A. - and it looks a little wider.

All other rare hair colors on SL Skippers can only be found on dolls marked: Skipper © 1963 Mattel, Inc.

Regular Raven Skipper found in the USA. As you can see from the pics her face looks a narrower than the face of the doll from Germany pictured above. Her face is a little discolored, like normal for the Skipper dolls produced after 1965 (without "Skipper" in their markings). Still, this doll is unusual because she has unfaded lips.

Evidently, some tan skin BL Skippers were sold with heads of the early SL Skipper dolls - or with left over hair from these dolls. You can find BL Skippers with rare hair colors, like "Two-Tone", "Raven", "Color Magic Two-Tone" and "Lemon Blonde". Usually, these dolls can be found with unfaded lips (usually, BL Skippers have faded or "butter" lips).

These dolls are hard to find, but there are too many of them to state this is due to some heads having been switched by little girls sometime in the past. Why these heads were used on the BL Skippers and NOT on the later SL Skippers with the marking: : © 1963 Mattel, Inc. (with the exception of the black haired dolls)  is unknown.

Pink skin bendable legs Skipper dolls only come with the regular hair colors. If you find one with a special hair color, be aware - this is a reroot!