The brunette doll pictured on the clone doll overview page is marked "DAVTEX made in Hong Kong" on her back. Davtex is a toy company which sold fashion doll clones in the 60s - like Suzette and her boyfriend Don.

This Skipper clone is probably one version of Honey, Suzette's little sister.

Davtex Skipper clones type "Honey" can be found with different hair colors, some have rooted eyelashes and bendable legs. Their heads can be moved in every direction, just like Living Barbie's head. The arms are made of a solid rubbery material. The dolls were probably sold wearing a blue copy of Skipper's original bathing suit. Honey had lots of own outfits, some of them are pictured below.

I recently found another Davtex clone doll marked "DAVTEX made in Hong Kong" who resembles a Sausage Curl Skipper. Her head is attached to the body like Skipper's head - and most of the clone dolls - and is not as movable as the heads of the Davtex clones type "Honey". This doll's head doesn't have a marking. She is pictured further below.

Evidently, some dolls produced by DAVTEX were sold under the names of other companies, like, for example, some Peggy dolls sold by Plasty, Germany.

Pages of the 1965 Simpsons-Sears Christmas Catalogue: 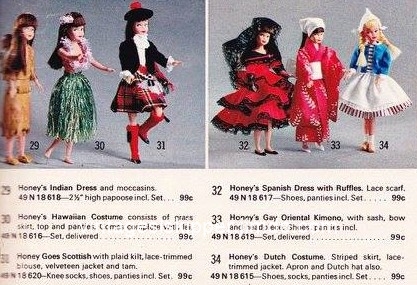 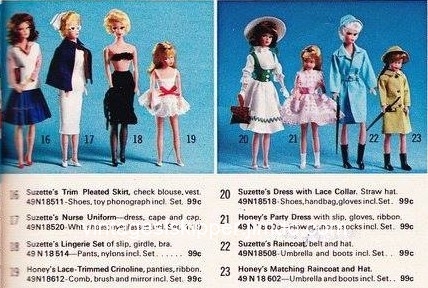 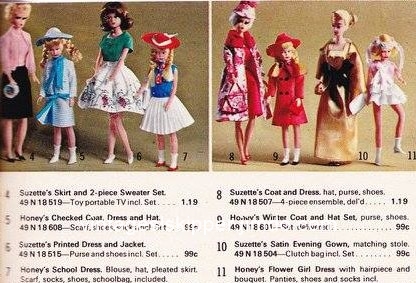 This doll is "Rusty" - doesn't she look almost exactly like the "Honey" version above?